I set off on the bicycle to find the junction of Cogsmill Burn and the Slitrig Water, which later joins the Teviot at the point where the heron fishes in Hawick.

Cogsmill Burn is my closest water way and runs a couple of fields away from the back of the house.

It passes Cogsmill Hall – the pink hall which will soon be pink no longer – and under a bridge – and somewhere between that point and before the pig farm it runs into the Slitrig.

From the road, the junction is concealed. Instinct suggested it was somewhere behind the big gated entrance to Stobs Estate.

The sound of flowing water is audible and a broken down wall offered a glimpse of it, so leaving the bike, it was a scramble down the bank to a shady river – which one, though? I thought the Slitrig, as it seemed unlikely the Cogsmill Burn would have widened quite so much in such a short distance, so upstream seemed the most likely direction to find the meeting place. The riverbanks were lush. I noted hawthorn, beech, ash , rhododendron, hogweed, campion, wild garlic, raspberry and dock.

It was difficult to move through, and the easiest way to make any distance was by taking to the river. I imagined this might have been how the first people moved up the tributary.

After a good ten minutes or so of slow river walking, there it was, the meeting place of the Cogsmill Burn and the faster flowing, more chattering Slitrig Water.

Listening is a continuous, subtle adjusting and shifting of your weight as your feet negotiate stony riverbeds. 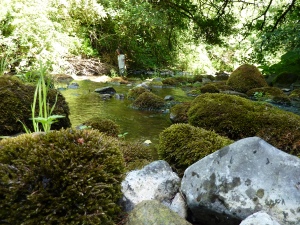 It is a state of opening up and out through all the senses.  A present tense state of being in complete attention. We might talk about listening with the soles of your feet, the sternum, the back of your neck.

It occurred to me that it wasn’t the water that I was listening to but the flow, the passing of the water that sounded the stones and branches and plants that it moved over, under and by.

I thought I was hearing voices on a distant radio somewhere but this turned out to be the conversation of a specific combination of river, stone and branch in one specific place very close by.

Dipping a long, slim branch into a faster part of the water and allowing it to be taken by the river whilst still holding the other end, it was easy to sense the rate and energy of the flow which seemed to want to take it with you. This was easier to experience through the medium of the branch than by placing my hand into the river. The energy of the flow could be more sensitively felt when channelled through the branch into the hand and arm and finally the spine, and I thought I could perhaps begin to understand what it must be like to know the river with a rod and line and knew that this was river listening too.

Later in the day I passed the junction of the Slitrig with the Teviot on its way to join the Tweed at Kelso.

The heron was riverside listening too.

a platform for research and practice