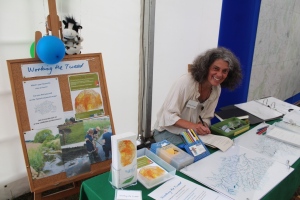 We were placed next to a large map of the Tweed which belongs to Border Union Agricultural Society, and made an interesting contrast in scale to the Tweed Catchment maps drawn by Working the Tweed artist Kate Foster.

Kate’s maps caught people’s attention and imagination because they reveal the complexity and density of the Tweed catchment, which is the most dendritic in Europe. As one person noted, it looks just like a lung. 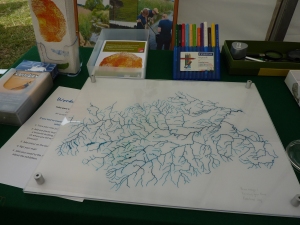 The maps are one element of Knowing your River, a family activity which encourages us to consider where we are each placed within the catchment and how the Border region is connected through the many burns and tributaries which eventually all meet and flow into the Tweed.

After a slight pause for thought, many people were able to find whereabouts they were located on the map, which shows the fantastic amount of river knowledge that people have in the Borders.

I liked this local river knowledge encapsulated in a verse:

The foot of the Breamish and the head of the Till
Meet together at Bewick Mill.

People used the catchment ink drawing to make a tracings which showed their river journey to Kelso if they had travelled there using the water ways. By adding other details of favourite haunts, activities and memories, these transformed into personal maps of stretches of the rivers. These will all feature in the Working the Tweed exhibition at Harestanes Countryside Visitors Centre, October 9th – 31st.

Jules Horne also collected ‘biological records’ about our visitors, along with what their local river means to them and what they might change if they could.

Making the most of having so many river specialist in the same space, we were introduced  to the art of tying  fish flies by Tweed Foundation, were entertained with lively conversations and stories by River Bailiffs Eric Hastings and Kenny Graham (below with Tracy Hall from Tweed Forum), and witnessed the difference that Natural Flood Management techniques can make to slowing down water as it moves through an area through the Tweed Forum’s comparative catchment models.

One thought on “Working the Tweed at the Border Union Show”