The above images are available as a postcard © Tabula Rasa 2014

Stone Lives is an artwork that developed from an investigation of riverbank ecology at the meeting point of the Ettrick and Yarrow, at Philliphaugh near Selkirk.

Our arrival at the riverbank in an afternoon in late May coincided with a hatch of Stone Flies – aquatic insects emerging from the water to find a stone to air themselves, and shed their final larval form.

We were there to explore the river junction through movement improvisation, to understand it better as a complex place and to pay attention to more-than-human aspects. We were three dancers  – Merav Israel, Claire Pençak, and Tim Rubidge – and myself as recorder.  The river was low and we could walk on the smoothed rock, ancient mudstones shaped and sifted by ice and water.

We had in mind the idea of a ‘passing-through-place’, a concept developed by an Australian cultural geographer, Leah Gibbs:

“So what I’m trying to get at with the idea of a ‘passing-through place’ is that some places may not be permanently dwelt in, but are extremely significant, vital places none-the-less. Permanent dwelling, fixity, longevity, are not the only ways of forming meaningful relationships with places.” (Leah Gibbs, reference 1,  see previous post)

As a newcomer to dance improvisation, I was entranced by the dancers’ swift and playful development of ideas. We all followed suit, when Tim placed a stone on his head. 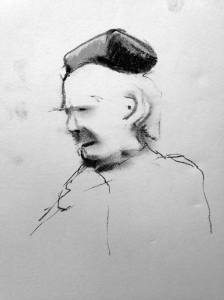 As Merav said, placing a stone on your head is a way to know the shape of your skull. What shape of stone fits you best – flat, hollowed, rounded, long?

And how do you walk? My sense was of becoming a taut and aware line, a line moving between the shapes under my feet and the touch of the stone on my head. Attention is drawn to what is above and below. Tim described needing to adopt ‘a lightness of touch – otherwise the rocks got too rocky!’  With great balance, the dancers developed the possibilities of a stone minuet by circling in the forms of an early and stately dance.

Meanwhile Stone Flies were passing through their own sequences, taking flight after many larval forms. They left husks of themselves on the stones, an abandonment to life. Females were flying upriver, dipping into the water to lay eggs. 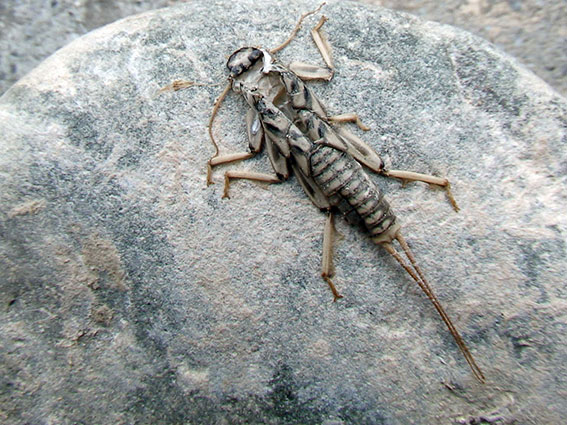 Merav was the first to see them, and puzzle over their presence. She described this later:

I was going in a direction no-one else was, I was skipping over stones for a long time … trying to see how far into the river I could go and still be on land. One of my jumps, was so! that I had to bend over because I lost my balance, then I realised there was lots of stuff clinging to the stone I was standing on. Something I have never seen before, so I had to squat down to have a good look at them. They blended into the stone quite well so I had to try to figure out: what is it I am seeing? There was an interesting shape, I couldn’t figure out what was the head and what was the tail so I had to investigate the structure. I imagined there was a bit of a split somewhere, that could be the tail – though the head did not really look like a head, on the other side. The colours – there was a nice pattern of lines, greys, lighter greys, and blacks, almost like a tiger. It really was the colours of the stone itself, and it did not seem like they were moving at all.  So I wondered if they were alive.  And I saw they were everywhere, everywhere on the stones around me.

This set me on a trail, I collected husks for some days after – keen to find them before river levels rose. I searched online too, learning that of all the insects that live in water, Stone Flies need the cleanest water. They are ecological indicators of healthy streams, flattened and adapted to be able to cling to stones in rapid currents.  Apart from Trout who devour them, they are best known to fishermen, river ecologists and entomologists.  As one source remarks: “they are rather endearing little creatures once you get to know them”.

The fossil record of Stone Flies stretches far back to the Permian, but their adult life is brief.  A juxtaposition of Stone and Fly offers simultaneity at different timescales – a ‘so-far story’ (see earlier post here).

Stone Lives became an artwork inviting anthropologists at an international conference to share a sense of stone, and life supported. 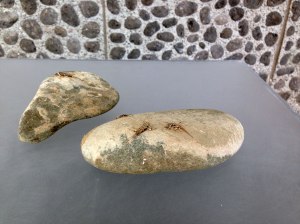 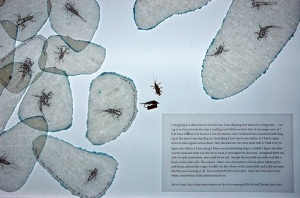 This work will be documented further. Support from the University of Aberdeen (Knowing From Inside project) allowed presentation at the Anthropological Association Decennial Conference, in Edinburgh June 2014, as part of a collaborative Speculative Ground Project with anthropologists Jen Clarke and Rachel Harkness.  The conference theme was Enlightenment. Stone Lives assisted an artistic exploration of Land Use. Our contribution  re-works anthropocentirc perspectives with an exploration of multiple aspects of place, articulated through Claire Pençak’s new text on Approaching Choreography.

Grateful thanks to support from the funders and conference organisers: