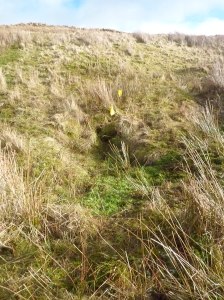 In February we welcomed Christo Wallers, a film maker based in Northumberland, to the team of artists working on the Dispatches from the Source project.

This is Christo’s proposal for a 16mm film project in response to a conversation about the ideas we have been exploring so far around source materials. I had also recently discovered that the deep groundwater that feeds the source of Tweed also feeds the sources of Annan and Clyde.

This film project plays upon the shortcomings of primary source material. As you mentioned, the source of a river’s water is impossible to isolate, due to the plurality of sources of water that feed into a spot which is in itself only labelled as the ‘source’ because of a general agreement, as opposed to an empirically provable location.  The source of the river’s water becomes a mise en abyme, as each source has its own source, in an endless cycle of precipitation.

The film is a photochemical record of the location.  It is more too, because the 16mm film negative will be buried on the spot which the lens focused on, for 6 weeks, resulting in a partial decomposition of the image (deleting source material) through contact with the ‘source’.  It will be the oxygenation, uv damage and micro-organisms living in that very spot that will be responsible for the decomposition, but is that not source material of a degree further veracity, the previous being only an image, the latter being a material record of the place.  Celluloid film, as opposed to digital, is considered indexical, because there is an inherent truth in the fact that light bounced off the pro-filmic object (the spot of ground agreed to be the source of the river) and chemically changed the film frame – as such it is an index of reality.  Digital video, with its translation of the same phenomenon into data that is distributed to a matrix of pixels, cannot make the same claim.  It is an old theory, suggested by Andre Bazin, a French film critic in the 1950’s predominantly.  It feels interesting here because of the notions of source material under investigation. 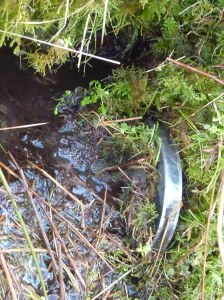 I would shoot 400′ of 16mm colour negative, at the source of the river Tweed, or the source of a nearer river to you, if that made sense. That would be processed and printed, and the print sent back up to you to bury.  After this time, the print should be exhumed, dried very carefully, and then either run through the projector if it is stable, or I would have an interneg and a print made at the Star and Shadow Cinema, with the help of Mat Fleming.  This print would, if projected at 24fps, last approx 11mins.  For the processing of the print, it occurred to me that the chemistry required could all be made up using water from the same location, including rinse water.  This plays too on the ritualistic quality of the project – burying and exhuming film for the purposes of a quasi-scientific project is kind of a clash of ideologies – the mystical or the ritualistic.

The resulting film would I expect be full of cracks, mould formations, and other signs of decomposition, showing layers of contrast that will be unexpected.  It could be creatively projected in relationship to the choreography.  (Christo Wallers)

So that’s what we are doing.

Christo went to find the source on February 4th.

Dispatches from the Source

He returned with film documentation, several litres of Tweed Water and a china figurine of a lady with a parasol that he found lying on the ground.

I returned the developed film to the source on February 21st.

I also came back with Tweed Water but for a different purpose. Neil Manning, the farmer who works that land, tells me that it is the best water to add to whisky.

I’ll return in April to find the film and pass it on to Christo for the final process.  In the meanwhile I left a note in case anyone came across it .

Thanks to Neil Manning, farmer at Tweedshaws for permission to bury the film.

One thought on “Source Materials: A proposal”